How Do All ,
Here`s a guest post about a traditionally operated UK Floor Maltings by Mr Robin Appel   ,
Thanks for the article Robin , appreciated .
Cheers All ,
Edd The Brew : beerhistorybloke@gmail.com 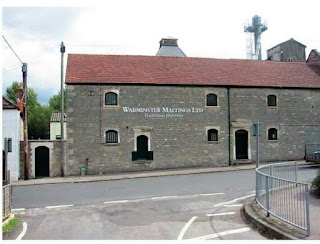 Once upon a time, there was a windmill or watermill for grinding corn, and a malthouse, in every other parish. Bread flour and malt were staples required by most households, the malt to make ‘small beer’ (less than 1% alcohol) when the water was not safe to drink.
By the middle of the 19th century, ever larger breweries established themselves, and demand for malt consolidated around industrial capitals. It followed that ever larger malthouses proliferated, mostly in and close by areas where the best barley was grown. We are talking about areas where the Icknield Series soil type prevailed. This particular soil type is the best soil for premium malting barley production. It is depicted as an area which breaks out of the east coast of Yorkshire, cascades south over Lincolnshire, West Norfolk, across Cambridgeshire and down through the Home Counties, and spreads right across the south of England from Kent to Dorset. Within and adjacent to this zone “malting capitals” were established in places like Mistley (Essex), Ware (Hertfordshire), and Newark (Nottinghamshire). The most westerly of these “malting capitals” was Warminster in Wiltshire. 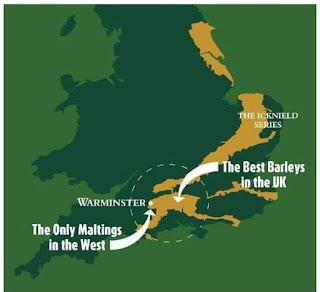 Up until the beginning of the 20th century, all these maltings, however big or small, were “floor maltings”, named as such because the managed germination of the barley takes place on long floors, supervised by maltsters wielding malt ploughs, rakes, wooden tined forks, and wooden bladed shovels. An industrial process for making malt ‘pneumatically’ had been invented in the mid 19th century, but made no impact on the industry in Britain, because the UK malting industry was fiercely governed by the Commissioners for Excise, under the guise of The Malt Tax, which drained and strained the industry for nearly 250 years.
The Malt Tax was first introduced to help pay for the Civil War (1642 -1651), but was quickly identified as an inelastic tax – the higher the rate of tax, the more the revenue flowed in. People had to have their malt (beer), and malthouses, with their pyramid style kiln roofs were easily identified by Customs Officers. Very quickly, successive governments began to exploit the tax to pay for ex curricular activities e.g. war (a brand new fleet of warships), and maltsters were driven to trying every which way to evade the tax. The outcome of the attempts at tax evasion was that the Commissioners for Excise wrote a rigorous Rule Book for making malt, and every malthouse had to be designed and operate around it, or it was so heavily penalised it was eventually driven into administration. 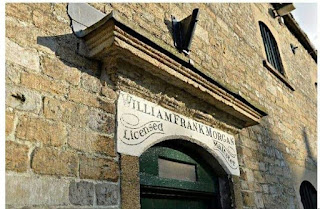 In Warminster, in 1855, an established maltster, and brewer, William Morgan, had observed the impact of The Malt Tax on his 35 or so competitors in and around the town. Their continuing struggle with the ever more punitive rules and regulations encouraged him set about building a new ‘state of the art’ maltings on the, then, edge of the town, with all the design features, and the scale, to surmount the fiscal challenge of making malt. In 1879, William Morgan’s son
William Frank Morgan, re-modelled the maltings, again around the rules and regulations of The Malt Tax, and in 1880, The Malt Tax was finally repealed.
But despite setting the malting industry free of regulation, new technology was very slow to creep in. Like William Frank Morgan, most maltsters were by now, substantial businessmen, and they had spent all their money on multi-level floor maltings. Then the First World War got in the way, swiftly followed by the Great Depression, then the Second World War. Floor maltings continued to dominate the industry all the way into the 1960’s, and amongst it’s survivors was Warminster Maltings.
At the turn of the 20th century, William Frank Morgan handed his maltings over to his much younger brother-in-law Edwin Sloper Beaven.
A local farmer’s son, Beaven left school early when his father died, but struggled trying to run a farm;  But as a maltster he really came into his own, studying the science of barley and malting which led him into barley breeding. To cut a long story short, Beaven bred the first genetically true variety of barley in the world, which he bred in Warminster, in 1905. This was a cross of two landrace varieties (landrace: wild selection) Plumage from Sweden and Old English Archer. Beaven named his variety Plumage Archer, and it outperformed all previous varieties of barley not only in the field, but in the maltings and in the brewery, and it swept all it’s predecessor varieties of barley off the face of the industry.
Today, most modern varieties of barley can be traced back to Plumage Archer, the most notable of which is Maris Otter (2nd generation, 1965). 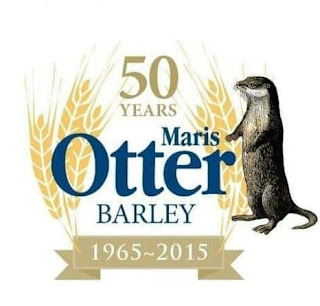 When the change in malting technology across the UK industry eventually came about, it was swift and brutal. Floor maltings right across the country were, for the most part, demolished, and production was consolidated on little more than a couple of dozen sites. However, four floor maltings, soon to be reduced to three, survived right into the 21st century! Of these, the only stand-alone floor maltings remaining now, is Warminster Maltings.
Owned since 2001 by Robin Appel, a barley merchant from Hampshire ( who also owns the rights to the production and marketing of Maris Otter barley), the third era of this maltings has been all about the rise and rise of the Craft Beer market, not only across the UK, but all over the world. Making malt the traditional way, by hand, on floors, in small batches, is an ideal fit for the small brewer when varietal identity and provenance can be married to bespoke specifications, and delivered fresh every fortnight. 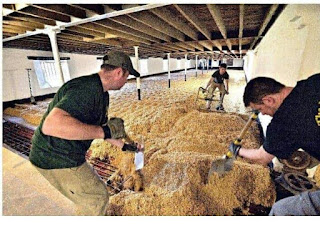 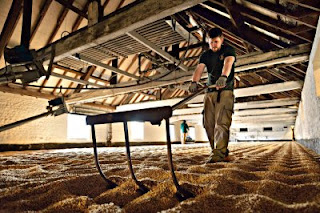 Today, the maltings is managed by Robin Appel himself, who has stepped back from an active role in his grain trading company in order to run the business. The complex of malt houses is Listed Grade 2*, and regarded by Historic England as of significant importance as a heritage site because, it not only still makes malt, but it is a profitable business in its own right, employing 18 staff, and still reinvesting in it’s future.
Most of the original complex has undergone full restoration, with one last project due to be embarked upon in April. This is an ambitious undertaking, re-instating the original pyramid kiln roofs on Kilns 3 and 4, which were destroyed by fire in 1924. The pyramid kiln roof is the signature architecture of a Victorian floor maltings, and soon Warminster Maltings will have three of its original four pyramids!
The maltings is not only Britain’s oldest working example (and that includes the floor maltings attached to a handful of distilleries in Scotland), it continues to make some of the finest malt that money can buy. The choice of malt for the Supreme Champion Beer of Britain in 2008, 2011 and 2019 was Maris Otter, and it was all made on Warminster Maltings floors. So, it can be said the illustrious career of this famous malt house continues to stride forward, and with a reach and support which very much belies it’s modest output. It is truly an icon of the UK’s brewing industry!

Thanks for your coments ; they`l be posted after approval by the blog author.

Other Gradely Blogs and Websites !!